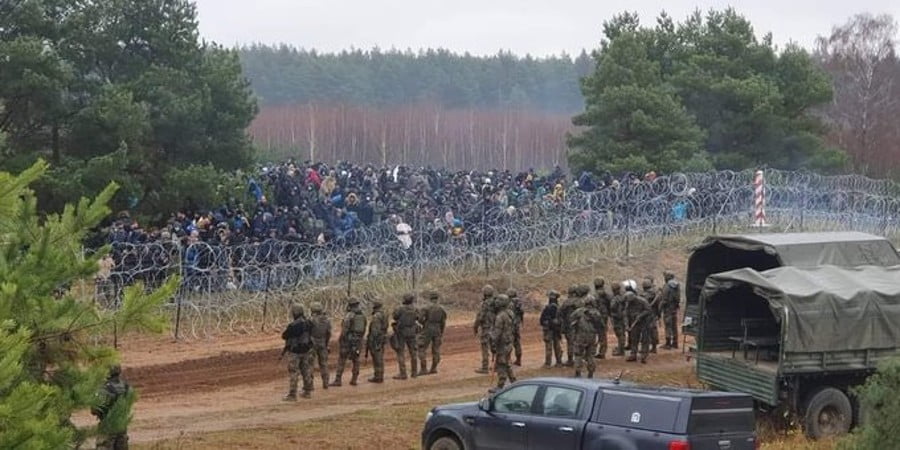 The Polish side is becoming increasingly cruel. Near the closed border crossing Kunica-Bruzgi, desperate migrants threw stones, branches, and empty cans of tinned food at Polish officers and soldiers. On the Polish side, the police and military retaliated with tear gas and water cannons.
On Tuesday morning (November 16), video from the scene was released, showing dozens of men, some wielding sticks, approaching the demarcation line. Other footage showed a vehicle on the Polish side of the border firing water jets into the air, as well as clouds of smoke and light rising from projectiles fired by border troops.
The Polish Ministry of Defense has tweeted about a “attack by migrants” who are “very aggressive.” Migrants can be seen throwing objects in another video released by the Polish government. According to the Polish side, these are bang grenades provided to the migrants by Belarusian border guards. There has been no evidence presented to back up such claims.

Other footage that has been posted online in the last 24 hours depicts very different scenes. Women beg for help as they stand at the border crossings. They are not aggressive in the least, and they complain about the cold — the temperature at the border now regularly falls below zero, and it does not rise above a few degrees during the day. The pleas are ignored by Polish police officers and soldiers, who are also visible in the video.
The migrant encampment on the Belarusian side has several hundred to two thousand migrants. There are men, women, and children who are stranded in the woods, without shelter, warming themselves by bonfires, and without medical care. Some migrants are sleeping in tents or sleeping bags on the road near the Kunica border crossing, which has been closed until further notice and cannot be used to apply for international protection. An 8-year-old Kurd died in the encampment, according to reports from yesterday morning (17 November). Migrants had previously reported the death of a 43-year-old Palestinian woman who had previously lived in Syria as a refugee.
According to Brussels, a large number of flights to Minsk, Belarus’ capital city, have been scheduled from troubled countries such as Iraq, Iran, and Syria, with desperate people being shipped to the shared border and barred from returning.
Belarus has denied the charges, claiming that it is simply no longer willing to intervene and stop people attempting to cross the border into the EU in light of the sanctions. Brussels is reportedly considering a new set of sanctions aimed at Belarusian officials as well as airlines suspected of aiding in the movement of refugees.
In response to an increase in the number of people attempting to cross into the EU from Belarus, Warsaw has mobilized over 15,000 police, border guards, and soldiers and declared a state of emergency in recent weeks. Officers used pepper spray and riot shields to keep groups from crossing the border last week.

#Poland: Intimidation of journalists at the #Belarus border by police & security guards continues to escalate.

A crew from @RTenfrancais, both French citizens, have been detained by Polish police as they were covering the ongoing refugee crisis on the border with Belarus, this morning.

Poland has banned journalists from working within 3km of the frontier. https://t.co/NUaJWaRv3Q

Journalists are also subjected to harassment by the Polish government. Two French journalists covering the crisis for the Russian international television channel RT were detained by Polish police and brought before a court earlier this week, accused of illegally crossing the border. Three photojournalists were attacked by Polish soldiers in the village of Wiejka, in the Podlaskie region, near the border with Belarus, the day before yesterday. The three journalists are Maciej Nabrdalik, a World Press Photo winner whose photos have appeared in The New York Times, Maciej Moskwa of the documentary collective Testigo, and Martin Divíšek of the European Pressphoto Agency.
Polish authorities have barred the media from covering the situation on the ground, effectively instituting a media blackout that has been widely criticized and remains in place.
The Barricade is an independent platform, which is supported financially by its readers. If you have enjoyed reading this article, support The Barricade’s existence! See how you can help – here!
Also, you can subscribe to our Patreon page. The Barricade also has a booming Telegram channel, a Twitter account and a YouTube channel, where all the podcasts are hosted. It can also be followed in Rumble, Spotify, SoundCloud and Instagram.

From Belarus, with love…