Close to 80% of people in Bulgaria, which are located in “the visible” part of the economy and declare their income, make net income below 460 euro per month. More than half of Bulgarians work for an imposable income below or equal to the minimal salary.
This is what data from the Ministry of Finance show for the paid tax on the income of physical persons for 2018, which were presented by minister Vladislav Goranov in an answer to a parliamentary question by the Bulgarian Socialist Party.
Originally, Goranov presented in the National Assembly erroneous data, which showed people getting richer, and they were distributed with no critical reflection in a number of media, in spite of the big problems with the figures in them. A few days later a new document, which admits for the mistake and presents the correct data, was uploaded on the site of the Parliament.
The Bulgarian Socialist Party asks almost the same question about incomes in Bulgaria for a third consecutive year. Its answer is the only source for such data in the distribution of the income at home. Unfortunately, the asked information by the member of parliament Dimitar Danchev, shows categories of income, which are different from those in 2017, which doesn’t allow for correct comparison, but allows for some conclusions. 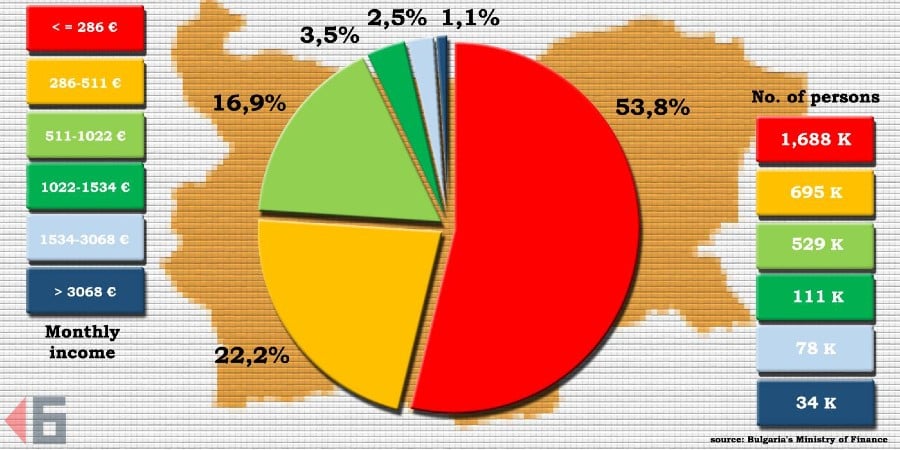 Another important note is that these figures include people, who have declared incomes in accordance with the Law for Taxation of Incomes of Physical Persons, but are not working – e.g. incomes from rents. This means that if we could review only the labour income, the situation would have been even worser. But at this moment we don’t have another instrument to overview the labour incomes, apart from these data.
The overall number of people, who pay tax upon incomes of physical persons in 2018 is 3 136 523. They are 30 000 more than those in 2017, as the comparison with the data from the previous year shows.
Close to 1,7 million people, which is more than the half or 53,85% from all who declare imposable incomes in Bulgaria, declare montly income, which is equal or lower than the minimal salary. The group of the pour increases with around 30 000 people in comparison with the previous data – in 2017 53,4% of all the people have been receiving income below the minimal salary (then 261 euro).
Others 700 000 people or 22,17% of all the people have been in the second category- imposable income between 286 and 511 euro. This means that 76% of the people, who declare imposable income in Bulgaria make below 511 euro per month. This group becomes a bit smaller in comparison with the situation an year earlier, when 79,5% were falling in it.
It is important to note that the data refer to the annual fiscal base, which means that the social security payments have been made, but the personal income tax has not yet been paid. This means that the net disposable income of each man from each group is 10% lower (with the exception of the income from dividends of a part of the people in the higher groups, who are taxed with 5%), because Bulgaria is the only country in the EU, which has no non-imposable minimum in some form. If, for example, your fiscal base is a bit above 511 euro, that puts you in the third group, and your real income is around 51 euro less.
If we expand a bit more the calculations on the data, which were presented by Vladislav Goranov in parliament and add the people, who make between 511 and 1022 euro, these are 530 000 (16,88%) people.
In conclusion, in Bulgaria in 2018 92,9% of all the people, who declare imposable income have been receiving officially income below 2000 leva, which means disposable income after taxation of around 900 euro.
A view at the tiny medium layer and the tops of the income pyramid shows that the highest income group – those who receive more than 4601 euro per month are only 0,57% or 17 763 people. In the data for 2017 15 523 people have had income above 4550 euro. Therefore there is an increase by 2000 people.
Around 110 000 people (3,55% of all) have declared imposable income between 1022 euro and 1534 euro, while in the next group enter 77 688 people (2,47% of all). 16 237 (0,51%) have had income between 3068 and 4601 euro.
It is worrying that the group of the poor doesn’t get smaller, but increases by around 30 000 people, which is 1,8% of the overall number of people in this group in 2017. At the same time the group of the rich increases by around 14%.
If we merge the two groups with income above 3068 euro per month, these are 1,08% of all the people who pay taxes in Bulgaria.


Seen through looking glass, inequality even only in the top group is enormous. The incomes, which are hidden in offshore zones and other schemes, which the people at the top of social pyramid can use, don’t enter in the calculation.
That is how for a consecutive year it gets confirmed that no matter how much the rulers laud themselves over the low levels of unemployment, this fact remains without much importance, when close to 2,5 million people don’t make sufficient money through labour in order to allow for a decent life. A large part of more than 2 million pensioners with a medium pension of around 189 euro don’t enter in the calculations too.
The data, which Vladislav Goranov has presented, should be discussed at any conference or seminar on the phenomenon of “working poor”. The distribution in the various groups shows for a consecutive time how disputable it is to speak in Bulgaria about “middle class”. This notion should mean “a large group of people, which is situated between the very poor and the very rich in a society”, but such group simply doesn’t exist in Bulgaria. The data is telling for everyone who speculates with the notion “medium salary” – an indicator, which doesn’t quite have a sense to be consulted, because of the big deviations and the big inequality, which puts Bulgaria in the top of the EU in negative sense.
Photo: Pixabay, CC0
The Barricade is an independent platform, which is supported financially by its readers. Become one of them! If you have enjoyed reading this article, support The Barricade’s existence! We need you! See how you can help – here!
Bulgaria income inequality poverty Vladislav Goranov