AfD is a liberal party

AfD (from German abbreviation ”Alternativ für Deutschland” – ”Alternative for Germany” ), though having at European level and in international media a reputation of far-right party, caused mainly by islamophobic, nationalist and deeply Eurosceptic stances, alliances with historical nationalist parties, like “Lega Nord” or “National Front”, ill-famed relations with Steve Bannon, is, at its ideologic core, a liberal party. This is exactly the point this article wants to make.
The intention with current writing is to scan AfD manifesto, focusing on economic aspects, especially on those related to taxation, finance and money theories, as well as the role of state and German international policy and its strategic interests.
Why is AfD a liberal party?
Firstly, because this is how they declare themsleves explicitly. In the manifesto preamble it is stated right at the beginning:
We are liberals and conservatives.
We are free citizens of our nation.
We are staunch supporters of democracy.
Secondly, because of repeated public declarations coming from its members, reinforcing party’s essential doctrine.
Part of them are summarized in this article, pretty old, but still relevant to party’s essential ideology. It is a semantic swing between the two German terms for „liberal”: „feiheitlich”, presumably genuinely German, and „liberal”, rather ushered into the language. Column’s intention is also to dissociate from the FDP, the German „middle-class” liberal party, allegedly progressive and tolerant. The „feiheitlich” liberalism type of AfD would grant them the essential ideology they want to embody, namely „conservative liberalism”, and would place them closer, on the ideological scale, to FPÖ (Freiheitliche Partei Österreich – their Austrian sibling).
Another AfD assertion, this time on Berlin’s office website, belongs to Wolfgang Fenske, manager of Conservative Library (!!) and AfD sympathizer. His arguments pro-conservative liberalism are apofantic, on one side, in the way of its need to counter-balance socialism and any type of etatism, and on the other, historical, by pointing to its evolution in United States, compared to Europe. There, in North America, accordingly to Fenske, the term „conservative” is far easier attributed to the ideology of American for-fathers, whereas in Europe is rather associated to the aristocratic establishment, inherited from the Middle Age, that’s why it has completely other reputation. Along with that are also expressed sociologic and antropologic considerations on the human nature, its apparent propensity towards „values preservation”, as well as the „necessity” of a „conservative revolution”.
In another video assertion, a German vlogger, AfD endorser, talks with Peter Boehringer about the „future of liberal scene” in Germany, as well as internationally. This  Peter Boehringer, AfD MP, is a controversial character, even relative to AfD. A conspirativist, known for some infamous verbal injuries to chancellor Angela Merkel and former vice-chancellor, Sigmar Gabriel („Merkelnutte” and Sigmar „Dumpfbacke” Gabriel), which I will refrain to translate here, or for referring to former governing coalition CDU-SPD as „junta Merkel-Gabriel”, or to describe the moment when Angela Merkel was mandated as chancellor, as the ”Machtergreifung” (allusion to Hitler’s seize of power, in 1933), Boehriger is a staunch liberal. Member of ”Friedrich von Hayek Society”, he praises in this interview the monetarism of Ron Paul’s Sr. (the famous republican senator and founder of LibertyReport platform) and his political theories. He also bemoans the „green populism” and the „clima change – lie”, currently promoted by the mainstream media in Germany. He refers also to the Party of Reason, as being the last sheer-liberal party in Germany. There is nevertheless an interesting aspect about this party and namely the fact that it was founded in 2009, by Oliver Janich, known Focus Money columnist, one of the most spread and read business magazine across Europe, as a counter-reaction to continuous discussions in German media and civil society about adopting a CO2 tax.
Let me turn to the manifesto.
It contains, in total, 14 chapters, which cover essential political aspects: democracy and reform of electoral system, Germany as a Euro country, domestic but also international security strategy, labour reform, national and cultural identity, education and research, migration, infrastructure, housing, transportation and environment policies.
I already mentioned that in matters of migration, national and cultural identity, AfD doctrine is profoundly conservative, partly far-right, fascist, facet already quite visible in the international press and outside Germany.
Chapters 2 (Europe and the Euro), 10 (Economy, Digitalisation and Consumer Protection) and 11 (Finances and Taxes) reflect the core of its economical doctrine, and on them will focus the remainder of this article.
Before starting to comment on them, I would like to pause beforehand, on some few other aspects, which echo some of the “liberal and rightist” narrative from Romanian politics.
Those are firstly the existing “lack of democracy” in Germany, accordingly to AfD, due to current electoral German system, expressed at paragraph 1.5.3, in the manifesto. The high number (2500 in total, federal and regional) of MPs is to blame the German high administrative expenses. In this context, United States is taken as an example of functioning democracy, where the number of MPs scaled to the total population is much lower and consequently more efficient than in Germany (below the Manifesto’s official English translation): 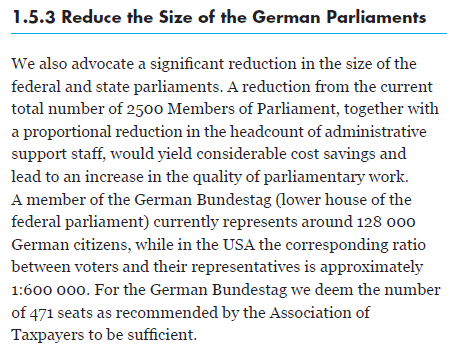 One can find here again, the narrative during Basescu’s first presidential mandate, in regard to the reduction of the total number of MPs and switching to a unicameral parliament, as an essential step towards “more democracy” and better administration.
Another aspect would be the one related to the military security and NATO membership. AfD’s take on that is clearly pro-NATO and against any budgetary constraints for secret and intelligence services.
This is exactly Liberals (PNL – National Liberal Party) position in Romania too. They are expressed in the same way in their Manifesto (see “Măsuri prioritare pe termen scurt” i.e. “Short-term measures”) and publicly stressed many more times by president Iohannis (below from the AfD Manifesto official English translation): 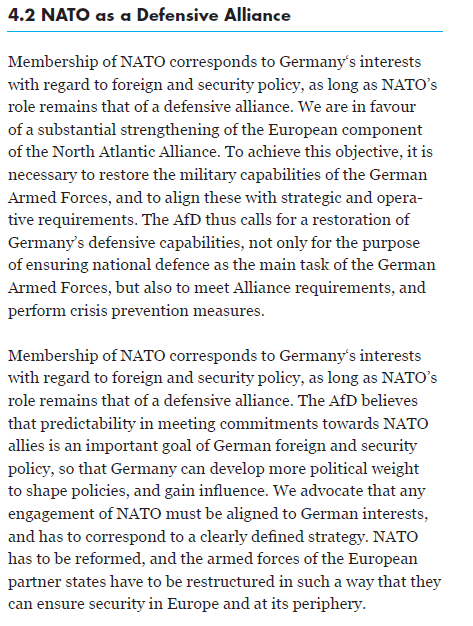 The housing shortage in German metropolis, a pressing social issue for which many leftist parties and organizations publicly protested, is also addressed in the manifesto, at paragraph 14.7. According to AfD this is not the result of totally uneven allocation of capital and resources across Germany, in part due to real-estate “laissez-faire” policies, but allegedly to the rigidity and restrictiveness of legal system regarding Building Laws and Acts.
The anti-social rhetoric is present too, but in a completely different configuration, because German low-income people are exactly the main body of AfD voters. Therefore, their position is clearly favouring the minimum wage (below from the official English translation): 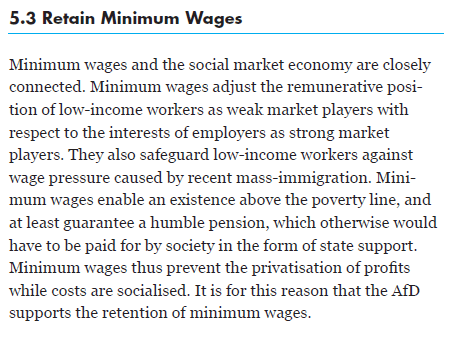 But resolutely against social migration: 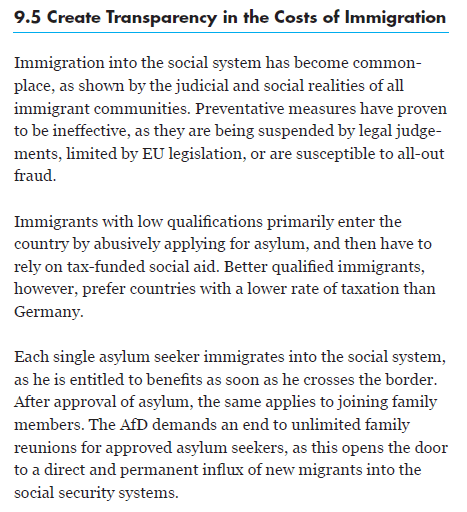 It is to notice here also the discrimination between “low-qualified” migrants, as social-profiteers, and “better qualified” migrants, as poor captives of high taxation burden, preferring to repatriate.
The Euro crisis was another aspect which boosted AfD support. This was mainly because they seemed to be the only party who addressed the issue upfront, whereas the historical parties turned a blind eye to it. They cleverly managed to amass a lot from the frustration created in Germany, fuelled also by the tabloid newspaper Bild, related to Greece financial rescue and bail-out. The narrative, present also in the Manifesto, in Chapter 2, can be summarized in this way: ” a monetary union, like the Euro zone, can only survive by fiscal transfers, relocating the savings from one area, like Germany, to another, like Greece, with weaker and more unreliable fiscal administration”. Evidently this completely disregards how much a monetary union, combined with internal labour law reforms (Agenda 2010), heavily payed off the German big capital and boosted Germany trade and fiscal surpluses. This is nevertheless a large topic which would deserve to have an article on its own.
But which is the political and economic AfD doctrine? This is summarized in paragraph 10.2 (below the official English translation):

The AfD business and economic ethos can be traced back to the ordo-liberalism and after-war German social market economy for-fathers: Walter Eucken, Alfred Müller-Armack, also author of a book, in 1933, advocating the nazy economic policies, and Wilhelm Röpke.
One can find further ideas, which taken out of context, would perfectly fit in the ReNew Manifesto (below the official English translation): 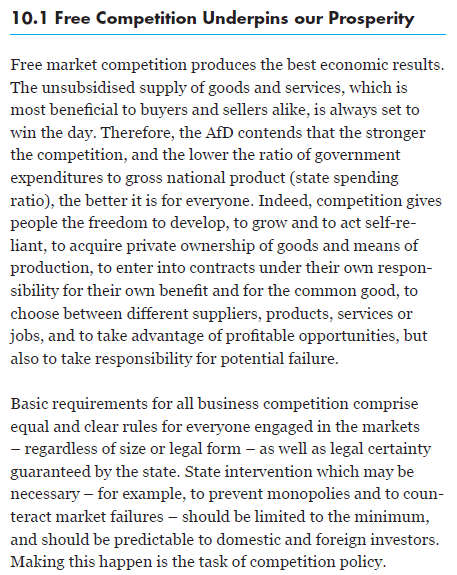 The free-market fundamentalists’ motto, taken from ”The road to serfdom”, has its place too:
“Any form of state-directed economy will sooner or later end in misallocation and corruption”.
Based on those premises, also reinforced at 10.4, reader would expect them to firmly support international trade agreements, like TTIP, CETA, or the ones with South Korea and Japan, as their liberal “mates”, from FDP, clearly do: 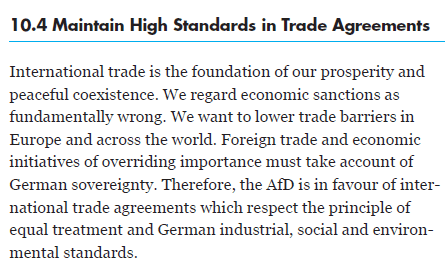 AfD nevertheless rejects them, on grounds of non-transparency (below the English translation):

Chapter 11 is entirely dedicated to financial, taxation and money theory aspects, where AfD has a profound “conservative-liberal”, pro-capital, anti-progressive taxation stance.
Two points are especially relevant in this context: 11.4 about abolishing the wealth-tax and 11.7 about restoring bank and tax matters secrecy. To those adds up paragraph 11.11 about repatriating German gold reserve, their fiscal and financial doctrine quintessence. This means, not a bottom-up wealth redistribution, as would every “people’s party” pretend to do, but from outside of Germany to inside.
The German songwriter and music producer, also “Die Linke” MP, Dieter Dehm, was not only right when saying that AfD is a hotbed for corporate and NATO lobbyist, but also that is the party of “common sense” liberals.
AfD tried repeatedly to dissociate itself from ideological and far-right internal rhetoric, as well as from the PEGIDA sympathies. They strove to “sale” themselves as a “liberal-conservative” party who openly talks about real social and economic domestic issues, which CDU (conservative establishment part) hesitated to tackle.

Moreover, there are also hard to find populist clowns or jesters in this party, like it is the case maybe to similar Southern or Eastern European parties. Majority of their prominent members, like Frauke Petry (who left the party exactly because of the nationalist excesses, aiming to found a sheer „conservative-liberal” party), or Jörg Meuthen (current party leader, also MEP), or Alexander Gauland (a long-time CDU member, currently AfD honorary president), are people with academic background, some of them holding PhD degrees. Furthermore, Bernd Lucke, AfD founder, CDU sympathizer in his youth, is macro-economy professor at Hamburg University, and left the AfD exactly on the same grounds, to found a sheer „liberal-conservative” party, the LKR (Liberal Conservative Reformers).
That being said, AfD is the real proof that nationalism, sometimes fascist, can perfectly live together with liberal economic and monetary theories, but also that a right-wing party, having a platform with no capital redistribution towards the bottom of social pyramid, can have most of its voters exactly there.
Photo: The AfD logo (source: The AfD Manifesto)
The Barricade is an independent platform, which is supported financially by its readers. Become one of them! If you have enjoyed reading this article, support The Barricade’s existence! We need you! See how you can help – here!