With the Coca-Cola sponsored blah-blah-blah festival of COP27 in the Egyptian dictatorship done and dusted – until the next one –  corporate greenwashing has worked its magic again. And this is not just because Rachel Rose Jackson of Corporate Accountability commented that, COP27 looks like a fossil fuel industry trade show.

Like whitewashing that seeks to wash things clean, corporate greenwashing is a form of corporate marketing spin telling you that toxic sludge is good for you. In short, greenwashing is designed to make people believe that a company is doing more to protect the environment than it really does. It sells lies.

Corporate greenwashing is deceptively used to persuade the public that a company’s products, their corporate aims, their policies and politics (read: lobbying – a $3.5bn industry) are environmentally friendly.

By now, one of the more classical textbook-style cases of corporate greenwashing remains that of the German car-giant Volkswagen. VW was forced to admit to cheating emission tests by fitting various vehicles with a so-called defeat device. This is a software that could detect when it is undergoing an emission’s test and then alters the performance to reduce the emission’s level – simple but effective.

This was done while hyping-up the low-emission features of VW vehicles through marketing campaigns. In truth, however, Volkswagen engines were emitting up to 40-times the allowed limit for nitrogen oxide pollutants.

Yet, VW still means Volkswagen and not Very Worried as VW made a whopping $15.5bn in 2021. Corporate greenwashing works – for corporations and that is the raison d’être for doing it. Yet, there are other countless cases.

Take for example, the global fossil fuel giant BP that has even changed its name. Such a move is also known as re-branding. Now, BP wants to be known as Beyond Petroleum – it sounds really green!

To greenwash one of the world’s major corporations, BP even put solar panels on their gas stations – that looks so green! Sadly for BP, the corporation got called out for their self-greening deceptions.

Next, there is also Coca-Cola. Coke also has been accused of greenwashing because of its ‘natural’ sugar claims. Coca-Cola started its marketing campaign as a way to attract more health-conscious consumers. And so, Coca-Cola turned itself into a health drink! More recently, Coca-Cola tried to beef this up through Innocent Drinks – also deemed misleading.

Yet, the reality of the Coca-Cola corporation looks rather different. For example, many of Coke’s plastic bottles probably end up polluting our environment – like oceans. Greenpeace listed Coca-Cola as the leading plastic polluter in 2019. It makes and sells around 100 billion (no spelling mistake!) single-use plastic bottles a year. In the very same year, the Coca-Cola corporationannounced,

Yet, their plastic bottles – whether made from recycled material or not – still end up in our oceans. Meanwhile, the Coca-Cola corporation – world’s worst corporate plastic polluter for four years in a row – has resisted legislation intended to force the company into adopting more environmentally friendly practices. At the same time, corporate greenwashing continues, for example, when Coke’s very own website says,

we make brands and products that …

These and plenty of other companies intentionally and deliberately instigate greenwashing PR strategies. Often, they do so in order to distance themselves from their – equally intentional and deliberate – environmental vandalism.

Corporate greenwashing means that companies and corporations spend very significant resources on corporate PR advertising the false image of being green. And usually, this comes in three versions:

Corporate greenwashing can range from changing the name of the corporation, the logo, and the label of a certain product to pretend to be supporting the natural environment while these products still contain harmful chemicals.

Yet, there are also multi-million dollar corporate PR campaigns that portray, for example, highly-polluting energy companies as eco-friendly. The key idea behind corporate greenwashing is that it covers up unsustainable and destructive corporate agendas and policies while, simultaneously, allowing corporations to carry on making profits.

Corporate PR firms like Edelman, for example, have even facilitated climate change denial. The corporate PR industry – and more importantly “routinely” – also funds astroturf organizations. These are PR firms that set up other – even more evil – organisations that falsely pretend to be grassroots activists while being paid by corporations. Some examples are: Ethical Oil, Resource Works, and the International Climate Science Coalition.

Of course, there are also well-paid business school professors in the mix supplying the necessary ideology to camouflage corporate greenwashing. The ideologies come – mostly – in three forms:

Ideological support for corporate greenwashing also comes from coin-operated corporate-sponsored think tanks in which crypto-academics find additional employment particularly when they are too bad even for a business school. Their junk science contributes to the crypto-academic field of management studies.

The ideologies they create work against democratic regulation and environmental regulation. All this comes as part of an even more important ideology – the global ideology of neoliberalism.

One of the methods used by corporate greenwashing are fake grass roots campaigns involving letter-writing to legislators. This is done on behalf of an – almost always – undisclosed interest group that is in reality, financed by a corporation. Yet, this sort of greenwashing also employs real people posing as volunteers. These corporate stooges speak at public hearings and participate in real grass roots campaigns.

In any case, such planned PR deceptions are central components of the corporate propaganda filling us with doubts – and even self-doubt – as the earth confronts the environmental abyss. Many of such activities amount to very serious corporate greenwashing.

Yet, corporate greenwashing has more tricks up their sleeves. The Chicago Climate Exchange, for example, was set up by global greenwashing polluters like BP, DuPont, and the Ford Motor Company. It was a tool for voluntarily cutting emissions that fancies the neoliberal hallucination of industry self-regulation.

Some evil heretics might argue that there is a reason why, for example, there are drivers’ licenses, why they are regulated by the state, and why people cannot regulate their own driver’s license printed out on their kitchen table. The corporate greenwashing idea behind the self-regulating Chicago Climate Exchange was to reduce pollution. It failed, even as a corporate greenwashing idea.

And of course, corporations cold-heartedly promote this fact. Their wealth is partly engineered through decades of corporate tax-cutscreated by governments that are under the spell of neoliberalism. Corporate PR sells this as sustainable corporate social responsibility (CSR).

This gives CSR a human face – as applied to capitalism and to make capitalism look human-like. It simply means that polluting corporations get up each morning, get increasingly smeared during the day, and simply wash off at night. That is the basic idea of CSR. CSR-fancying corporate polluters make particular use of greenwashing PR. It comes as part of their search for an environmental-friendly license to operate – a core ideology of CSR.

Of course, this reaches deep into company accounting where much of this is rather cosily sold as triple bottom line – people, profit, planet. Planet being a distant third! This accounting ideology emerged from none other than the corporate consultancy world.

The ideology behind it is to merge corporate profits with human society (people) and the environment (planet). Its goal: justifying profit making. Greenwashing remains a key component of this corporate strategy.

Following this business strategy, many companies and corporations have wrapped themselves in a green cloak. Today, brands even try to outdo one another with their eco-credentials to become the – hopefully undetected – master of corporate greenwashing. To win the green consumer game, companies often exaggerate environmental claims or simply make things up – whatever works best for the corporation.

Worse, criminal polluters even engage in a rather new form of corporate greenwashing. They share positive information about their environmental records while concealing negative aspects which, so the hope goes, can be offloaded onto others. This is known as externalisation. Meanwhile, the public should no longer see what is real – environmental pollution – and what a public relation constructed image of the corporation is.

One of the goals is to blur the boundary between what is reality and what is faked. This is also known as gaslighting. The idea of gaslighting is based on a 1940’s movie called Gaslight in which one is no longer sure whether the flickering of the gaslight is real or not.

Today, gaslighting is a propagandistic and manipulative-psychological tool used by, for example, global warming deniers that seeks to induce the doubting of one’s own reality and even sanity.

One of the goals of the more severe forms of corporate propaganda is that once a person’s underlying reality is lost, the person becomes more open to propaganda as words, images, and signs become self-referential while bypassing reason. Yet, the entire process is driven by the propagandist.

The simulation of corporate sustainability is about the pretence of a corporation as being environmental. And now comes the crucial bit. This is within the dynamic core of the capitalist economy.

Necessarily, corporate greenwashing has to leave out some very uncomfortable facts, like global environmental vandalism, starvation, sweatshops, slavery, managerial despotism, mass poverty, and global warming – our highway to climate hell. To divert attention away from the pathologies of corporate capitalism, corporate greenwashing does ten things:

1) it pretends that there is a trade-off between consumer choices and sustainability;

2) many corporations offer next to no proof that their supposedly environmental initiatives have a positive impact on nature;

3) corporate greenwashing lives from general statements that are deliberately kept vague and non-specific;

4) corporate greenwashing uses false labelling – often in the form of self-invented “eco-certification” that, in reality, is no certification at all;

5) corporate greenwashing pretends to be sustainable in areas that have next to no relevance to the corporation, their product, and the production process used to make these products;

7) of course, corporate greenwashing lies by presenting something – a something that simply does not exist;

8) corporate greenwashing sells false hopes into a corporate-based environmental future that does not exist;

10) corporate greenwashing converts capitalism’s reality of profits over people and the environment into pretending to be environmentally sustainable.

In the end, corporate greenwashing is an important tool in the arsenal of propaganda and corporate public relations. Capitalism not only lives by flooding us with consumer goods, it also needs an accompanying ideology telling us that two iPads will make us twice as happy.

This article was originally published here. 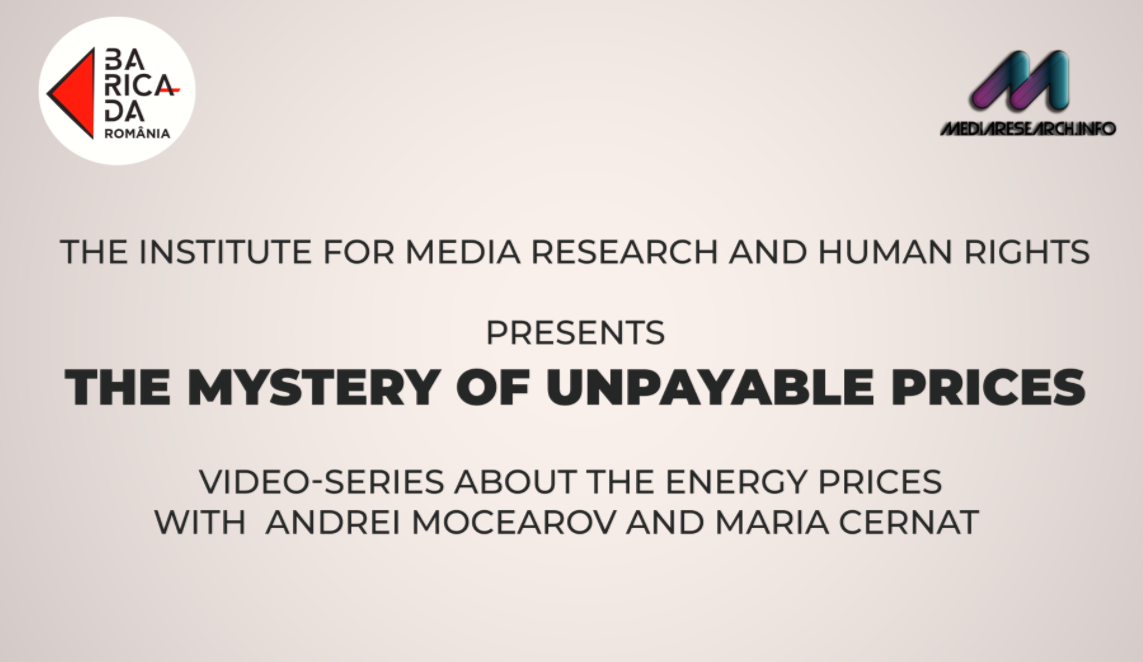 The mystery of unpaid prices – a series with Andrei Mocearov &..