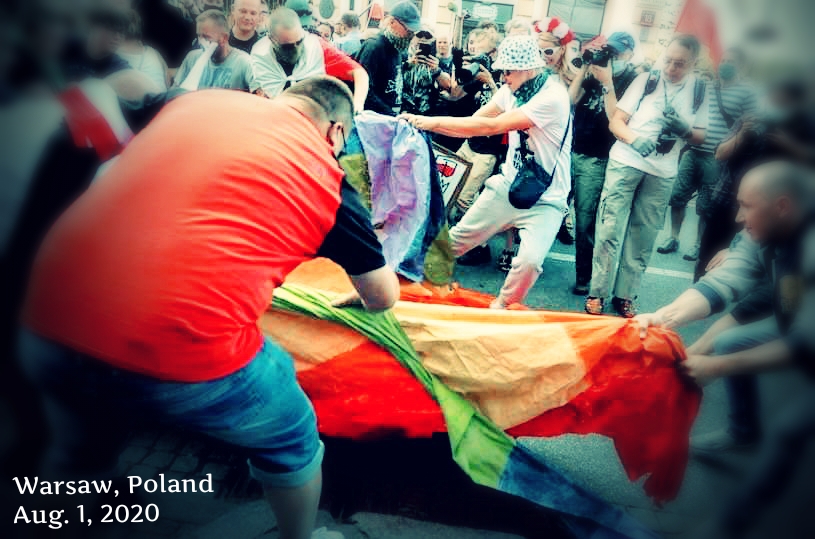 So, this is an effort sum up the events which transpired last weekend.
The Polish right-wing extremists marched through the streets of Warsaw to commemorate an uprising organized against their analogs from over 70 years ago. The ceremonies culminated several times when random people holding rainbow flags or banners with antifascist slogans were violently assaulted and the items they held up burnt and torn apart. The Polish police actively helped the right-wingers and went as far as to illegally enter the apartments of people who decorated their balconies or windows with such elements and ordered the tenants to take them down, claiming they were “disrupting a legal assembly.” The police also attempted to use the occasion to repress activists of a small social democratic party, the office happens to also be located on the route of the march. They accused these individuals of throwing bottles at the demonstrators. (Complete nonsense, the bottles were flying the other way.) It didn’t work because one of the MPs of that party was present and that prevented the officers from trespassing. On top of that, a journalist writing for a centrist liberal portal was beaten up.
This is where we stand 30 years after “democracy,” “human rights,” “freedom,” and “civic liberties” were installed in Poland. I totally understand many of you can have all kinds of reservations against the regime from before 1989 and I don’t expect everyone to love it. But please, try to be rational and at least acknowledge that the current ongoing social and economic experiment of the restoration of capitalism (in Poland and in Eastern Europe, in general) is drastically failing before our very eyes.
After 20 years into the People’s Republic, they were building 1000 schools across the country and had multiple campaigns for raising the civilizational level of the state and the society. 30 years into the so-called “free and democratic Poland,” our local inheritors of Adolf Hitler are leading the biggest ceremonies marking the anniversary of a tragic Polish anti-fascist uprising from 1944.
If you can’t see the difference, I’m afraid that you can’t be helped.

Will prosecutors in Poland go after Pope Francis for “offendin..

Poland: Time to abolish the codgerstate