Poland: Rage and fury after yet another fundamentalist excess 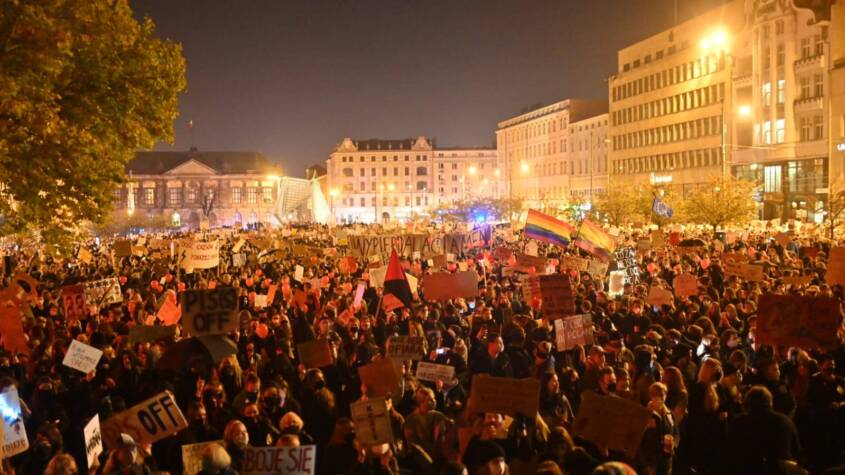 Since the shocking verdict of the Polish Constitutional Tribunal last Thursday, which resulted in the banning of abortions on the grounds of them representing drastic malformation of the fetus, there has been a huge and growing wave of protests all over the country. For the last five days, Poland has witnessed impressive mobilizations that can definitely be compared to those of the unforgettable Black Protest of 2016. If things continue to unfold in this way, we can expect not only a repetition of the events from four years ago but also a situation that actually exceeds that success. Back then, the Catholic fundamentalists from Law & Justice, the hardline reactionary party ruling in Poland since 2015, had to retreat at the last moment and withdraw the bill, totally banning abortions that had already been submitted for parliamentary proceedings. This time, the progressive movement could achieve much more — it could overthrow the government.
No, this is not an exaggeration. Of course, one cannot be sure that the mobilizations will continue, and there is no way to predict what strategy the authorities will adopt against the protests. For now, it seems that they have no good choice. If they repress the movement, they will only add to the already visible rage of the masses, but if they only exercise occasional violence (which seems to be their tactics for now), they will let the movement grow steadily anyway.

The events of the last five days prove it. It is not only the big cities, the population of which is traditionally more progressive than in the provinces. The demonstrations are everywhere. The most remarkable one was held in the north-eastern town of Białystok, known for being the Polish capital of the neo-fascists. A total of up to 11k people took to the streets, while the local public TV channel (totally owned by the ruling party) was showing programs about collecting autumn leaves. Really! Meanwhile, people everywhere were demonstrating their support for the protesters — waving flags from windows, blocking car traffic, etc. It was the leaven for powerful change. A handful of fascist hooligans who gathered near one of the churches looked as if the world was ending before their very eyes.

Except for Białystok which is still a relatively big urban center with a population of 300k, some really small towns were also part of the general mobilization. Grudziądz, Chojnice, Szczecinek, Chełm, Ostrołęka, Stargard, Koło, Łuków, Garwolin, Hajnówka, Sokółka, Bielsk Podlaski… Those are all really small towns by Polish standards, with many fewer than 100k inhabitants.
In Szczecinek a group of high-school students protested in front of the local church and, when confronted by the priest, chased him back into the presbytery shouting at him to “f*** off”. This is unprecedented and revolutionary. For the last 30 years, Poland has never seen a mood like this. Masses of young, angry, and determined people openly turning against the clergy and smashing its undeserved authority, removing it from the pedestal.

And while young people are definitely at the heart of the process, they enjoy massive support. In Gdynia, a big city on the Baltic Sea coast, football fans joined the protest; in Warsaw cab drivers showed their support; in the small town of Nowy Dwór Gdański, farmers protested in solidarity by driving their tractors behind the demonstrators.

The demonstration in Warsaw yesterday evening started outside the Archdiocese Curia, before moving on to the President’s Palace and then to the headquarters of the fundamentalist organizations of extremist Catholic lawyers — Ordo Iuris. During the day there were demonstrations inside and outside churches around the city. These were sometimes blocked by a combination of the police and far-right thugs.
Massive rallies were held in Kraków, Poznań, Wrocław, Gdańsk, Lublin and other big cities. This week things are expected to heat up. A decisive moment for Polish politics and the socio-cultural architecture of the country dominated so far by the Catholic church is coming.

i am almost home!! i’m safe but a bit tired and hungry but I’m glad I came here. #piekłokobiet #WyrokNaKobiety #wroclaw here’s a vid from protest in Wroclove, where I went pic.twitter.com/CriME2UwGK

Massive rallies were held in Kraków, Poznań, Wrocław, Gdańsk, Lublin, and other big cities. This week things are expected to heat up further. A decisive moment for Polish politics and the socio-cultural architecture of the country dominated so far by the Catholic church is coming.

THIS IS THE PROTEST IN POZNAN, POLAND. ITS SO POWERFUL pic.twitter.com/gknPAZNGdE

And make no mistake. This is no cultural war. It is a direct attack on the physical rights of women; the response cuts across much of the artificial divide created by the right over the past decades.