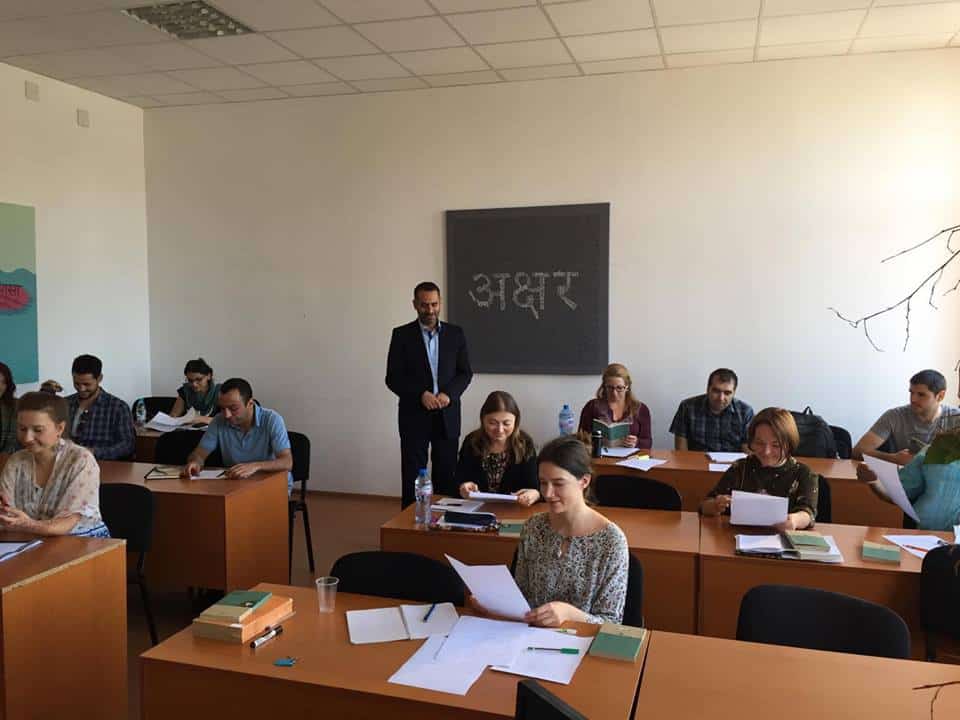 Globalisation and regionalization don’t depend only on economic issues, but can be spurred also by purely cultural and scientific interests. This is what two Iranian Studies events in Sofia showed in the middle of September. The first one was a Summer School of Iranian Studies with lecturers from Iran, Hungary and Bulgaria. The second one was a symposium for the heads of the Iranian Studies centers and Departments on the Balkans and Central Europe. Both events affirmed the importance of Bulgarian Iranology internationally and showed that Sofia plays an important part in the communication between East and West.
15 students and Iranian Studies absolvents from Bulgaria, Ukraine and Turkey listened to lectures on Old Persian and Middle Persian languages, acquainted themselves with the metrics of Persian poetry, with the stages of development of modern Iranian literature. Those who attended the course learned curious facts about the insidious Middle Eastern relations in the style of “Game of Thrones” between the Shia sect of the Nizaris, the Khoresmian kingdom and the Mongols, studied the life and work of classical authors such as Omar Khayyam and the creator of the Iranian national epics “Shahname” Abulqasem Ferdowsi. The participants in the course also learned more about the evolution of the notion of love in the Persian classical literature and about the various stages of the Iranian historical development. Lectures helped everyone to develop their knowledge of the modern Persian language – Farsi.
Such an Iranian Studies course takes place for the first time in this part of Europe, which was also noted by Iranian media. This summer school was an act of cooperation between the Sofia University “St. Kliment Ohridski” and the Department of Iranian Studies whose head is Assc. Prof. Dr. Ivo Panov and the Center for Iran, Balkan and Central European Studies (IBCE), whose president – Asst. Prof. Alireza Pourmohammad, is also a lecturer in the Iranian Studies Department of the Sofia University.
Pourmohammad started teaching in Sofia in 2008. During his travellings in the region, he found out that the relations between the various representatives of Iranian Studies Departments on the Balkans and in Central Europe are not at the desired level. It turned out that some universities have specialists in literature, others – in philosophy, third have experts on religious and political studies, while fourth put emphasis only on language studies. That is why Asst. Prof. Alireza Pourmohammad himself formulated the idea for IBCE and started discussing it, asking the Iranologists from the Balkans, Central Europe and Iran for cooperation. In Bulgaria this idea received support from the Iranian Studies Department of the Sofia University.
“From my point of view, in this first event of its kind we should be happy that it was a success. The numbers of students in the Iranian Studies Departments in the Balkans and Central Europe usually is small – 3-4 per year. But now we had 15 participants. This is a good attendance”, said the professor of Iranian Studies before Baricada.
As far as the second event is concerned, Asst. Prof. Alireza Pourmohammad also expressed his satisfaction: “Our main idea was to gather Directors of Iranian Studies Departments from the various countries of the Balkans and Central Europe. Also we considered discussing about the strong points of each university, where Iranian Studies are taught. We also wanted to discuss what could we all accomplish together. Given that our center is established in Bulgaria, we decided that our first meeting will be in Sofia and it would be best if we organize in parallel a course on various Iranian Studies disciplines, so that the students could communicate both with the professors from Iran and with those who come from other countries in Europe”.


At this moment IBCE still makes its first steps in the realization of its ambitious goals. Immediately after the summer school finished, a symposium of the Directors and professors of Iranian Studies Departments from Bulgaria, Poland, Hungary, Romania, Serbia, Kosovo, Turkey and Iran took place in the central building of the Sofia University. The Iranologists discussed possible initiatives and dimensions of cooperation, putting emphasis on importance of knowing each other and to create a community among themselves, where IBCE could play an important role.
The intention is to create study groups with members from this region – about history, philosophy, etc. Each group will have a head of its own – who would be a specialist in its field, while other experts from the Balkans and the Central Europe will be attracted to the group too. The goal is to create gradually a database in various thematic fields. If a researcher from the region has an interest in Iranian Philosophy, he is to know when and where there will be conferences in this field, he would be able to send an article, which would reach the conference and the expers in the respective field. That is how IBCE will support the development of the Iranian Studies research, while at the same time the researchers will not have to go to Iran.
„So far we have success. The conference „Iran and Europe in the Mirror of History”, which we organised in Sofia in 2016 had 115 participants. They came to Bulgaria – a small country, which is realtively distanced from the international and European centers for research on Iran. The publications of 35 authors were admitted for participation in the conference. Most of the spearkers were not Bulgarian – there were people from all over Europe and from the USA. Even though we had some financial difficulties, we managed to organise the conference very well” – said Pourmohammad.
The current summer school has been facilitated by the fact that the participants’ Persian language level has been advanced. That is why more interesting lectures could be offered.
So far IBCE, together with the “Association of Persian Language and Culture’s friends in the Republic of Bulgaria” and the Iranian Studies Department of Sofia University have published three volumes with scientific articles that were presented at the Iranian Studies conferences in Bulgaria in the last years: “Iran and Bulgaria in the mirror of history” (2011), “Iran and the Balkans in the mirror of history” (2013), and “Persian manuscripts in the Balkans and Central Europe (2017). In October a fourth book is going to be published – which will present the articles from the conference “Iran and Europe in the mirror of history” (2016).
The research center has also published two books in Persian language in order to help the researchers of the Iranian culture in the world. The first book is a catalogue of the Persian manuscripts in Bulgaria, the second one is “Zij-e Yamini” (The astronomical tables of Yamini) – a Persian scientific treatise, whose original is preserved in the National Library in Sofia.

Even before IBCE’s establishment the joint work of Asst. Prof. Alireza Pourmohammad and Assc. Prof. Dr. Ivo Panov leads to the publication of books, which are important for the Iranian Studies. A shortened version of the Iranian epic “Shahname” (Book of Kings) by Ferdowsi was published in Bulgarian in 2012 and obtained the prize “Bronze lion”of the Association “Bulgarian Book”.
Two years later the Bulgarian-Persian dictionary, whose scientific editor is Assc. Prof. Dr. Ivo Panov, and has as coauthors – Evche Pesheva, Abbas Mehdavi, doctor Hajjar Fiyuzi and associate professor doctor Reza Mehraz obtained the award “Book of the Year” in Iran.
Starting from autumn, IBCE intends to publish its own magazine in English, where scientific articles of experts from the Balkans and the Central Europe will be published. Organizing new seminars and conferences will go on. It is even more important that Iranologists on the Balkans and in Central Europe have agreed that they need to structure their own regional community.
“We have ideas which came after discussion with the professors and scientists from the countries of the region. We want to discuss with them what are their needs and what projects we could accomplish together. We try to develop relations with universities and scientific institutes, to exchange information, to have scientific contacts with Iran. The goal is to exchange ideas and to be useful for the Iranologists in this part of Europe. Iran also wants to develop official relations with the universities in the region and to contribute to the progress in getting to know its culture”, said Asst. Prof. Alireza Pourmohammad.
The economic globalization often is considered to be a game that strengthens the disbalances between rich and poor countries. But when regionalization at the level of culture, science and ideas is in progress, everyone is winning. That is why the two events in mid-September in Sofia have the potential for something new and better in this part of Europe, of which Bulgaria belongs.
Photo: The professor of Iranian classical and contemporary literature Nematollah Iranzadeh teaches in the Center for Eastern Languages and Cultures of the Sofia University (photo: IBCE)
Center for Eastern Languages and Cultures Globalisation Iran Iranian Studies Sofia University