Bulgarian justice is a litmus test for developments in society 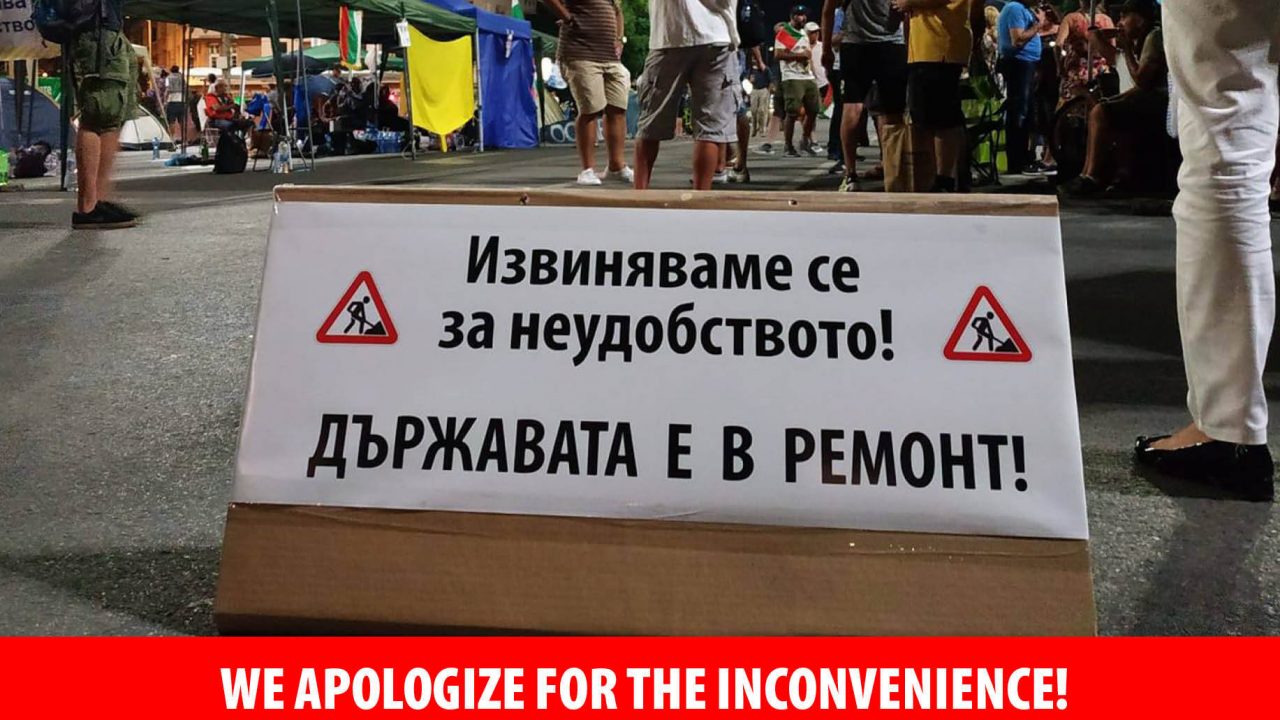 The Bulgarian judiciary has been at the centre of political talks and clashes for more than nine months since the protests began in the summer of 2020. They erupted after prosecutors stormed the president’s office, searching the office of an employee close to Roumen Radev. The protests had, among other things, an anti-corruption agenda and an explicit accusation against the chief prosecutor, Ivan Geshev, that he is acting in a corrupt way, benefiting the oligarchy that is represented by the businessman from the Movement for Rights and Freedom party, Deliyan Peevski. Following the protests, the president demanded the resignations of Geshev and Prime Minister Boyko Borisov and initiated several talks and actions related to judicial reform. At the same time, the Justice for All organization reminded the country of its vision of judicial reform, which will limit the prerogatives of the chief prosecutor and strengthen the power of judges in the judiciary.
This “historical” context is necessary to understand that in Bulgaria there is a mutual contestation of state powers and institutions, in which international protagonists are also involved in one form or another. The European Parliament’s resolution of 8 October 2020 on the rule of law and several social issues in Bulgaria (such as freedom of the press) is famous. In short, it stated unequivocally for the first time that there are problems with fundamental rights and the development of a democratic society in Bulgaria. Among other things, it stipulated that the Bulgarian prosecutor’s office lacks accountability and needs to be reformed. This resolution represented the highest point of the protests and their greatest success, after which they started to fade away, losing their sense after the internationalization of the Bulgarian issue was achieved.
In the context of these events in summer and autumn 2020, several developments targeting the Bulgarian judiciary have taken place recently. They also become more important in the context of the parliamentary elections of April 4, 2021.

Radev attacks the “Praetorian Guard” of the chief prosecutor

On March 11, 2021, President Roumen Radev submitted to the Constitutional Court a request to establish the unconstitutionality of some provisions of the Law on the Judiciary and the Law for the Defence of Persons in Danger in the Context of a Criminal Procedure (these are persons who must have the status of “protected witness”). These legislative texts constitute the so-called Defence Bureau as a structure subordinated only to the chief prosecutor. Over the years, the Bureau has grown in number of employees, budget and prerogatives, while its transparency and accountability have been reduced, as the Bulgarian press recalls. For example, it was added in the provisions that not only witnesses but also magistrates can be protected through it. The office does not provide information to any state body, but all institutions must cooperate with it.
Radev is now attacking, among other things, the provision that the “Praetorian Guard” of the prosecutor’s office can “arrest persons” when there is such an order from the chief prosecutor. As such, the office was at the centre of the “search and seizure” operation in the Presidency building on July 9, 2020, which was one of two great occasions that caused the protests to break out. The president notes in his description that in recent years through consecutive legislative amendments to the Law for the Protection of Persons in Danger in the context of a criminal procedure, an aberration from the constitutional principle of division of powers has been reached and all basic functions related to the management, control and accomplishment of the activity of the Defence Bureau are concentrated in the hands of the chief prosecutor. Thus, the constitutional prerogatives of the prosecutor’s office are “outgrown.” Radev also says that the independence of the judiciary can only be used to carry out the constitutional functions of the court, the prosecutor and investigators. And the realization of some police prerogatives by a structure of the prosecutor’s office prevents civil control, which can affect significant values ​​such as human life, health, freedom, and the privacy of some people. Moreover, according to the Bulgarian president, the chief prosecutor cannot “simultaneously lead the Bureau and exercise control over the legality of his activities — which means that he alone can control himself for legality.”

Almost simultaneously, the European Court in Luxembourg ruled that European arrest warrants issued by Bulgaria would not be binding on European states, as they are not subject to judicial review. Such protection of legality is provided in other European countries, but according to Bulgarian law prosecutors can issue such orders without the possibility of a review by a judge. The decision prompted an urgent convening of a working group within the Sofia Ministry of Justice to find legislative solutions to the problem.
Another piece of news also came from Luxembourg in early March — from the European Public Prosecutor’s Office (EPPO), led by Laura Codruţa Köveşi: 7 of the 10 Bulgarian proposals for European prosecutors were rejected by the European prosecutor’s office. The seven rejected candidates are investigators, regional prosecutors and a judge. Euractiv’s source explained that EPPO is reluctant to appoint investigators, who, unlike prosecutors, do not plead before judges and against inexperienced prosecutors in high-profile cases. While the European prosecutor’s office is awaiting new nominations, a significant proportion of prosecutors in the Superior Council of Magistracy do not seem to understand what more can be required in terms of staff.
In addition, a procedure is now under way in the Constitutional Court to decide whether the institutionalization of a “special prosecutor” who has the right to investigate and demand the resignation of the chief prosecutor is in line with the provisions of the Bulgarian constitution.

USA vs. Russia on corruption in Bulgaria

The plots of corruption and the fight against it in Bulgaria have also taken on international dimensions. After a representative of the American embassy criticized corruption in Bulgaria and the lack of action against it, the Russian embassy came out with the following comment:
“I drew attention to the recent statement by colleagues at the US Embassy in Bulgaria about the inability and lack of political will of the Bulgarian authorities to deal with corruption in the country.
The correctness and adequacy of clear remarks on sensitive issues for Bulgarian society, especially on the eve of the parliamentary elections, raises great doubts. We believe that such mentoring statements, as always without concrete evidence, cast a de facto shadow over both the politicians and the officials of the justice system of the Republic of Bulgaria.
The problem of corruption in the highest echelons of power still exists in the “most democratic” countries in the world (we will not remember, for example, some stories from the “Ukrainian file” of the current US leadership). It smells like hypocrisy, doesn’t it?”
On the other hand, corruption and lack of media freedom in Bulgaria are “serious challenges to the US-Bulgaria bilateral relationship,” according to a joint statement by US Senate Foreign Relations Chairman Bob Menendez (Democrat) and Jim Rich, one of the Republican seniors of the committee.
“The persistent corruption, declining media freedom, politicization of the judiciary, and other threats to the rule of law pose serious challenges to the US-Bulgaria bilateral relationship,” the joint statement said. “The Bulgarian government and judiciary must work to uphold the rule of law for all, not just some, and the media must have the freedom to report the truth without facing harassment, violence, or punishment,” the senators said.

What is missing from all these developments is the opinion and involvement of ordinary Bulgarians at a time when more people are otherwise politicized. If we have a look at the candidates for members of the parliament, it looks like only issues related to vaccination, masks, and freedoms in the conditions of the corona crisis can excite Bulgarians.
Obviously, there are several disputes surrounding the Bulgarian judiciary which could redefine the role of its institutions, especially that of the prosecutor’s office, in society. Bulgaria is heading for parliamentary elections on April 4, 2021 with several social and state issues, which create the impression that there are two realities — the local one, which feels well established and empowered in Bulgaria, and the European one, which sees Bulgarian society as incapable and in crisis. Given that neither the protests nor the election campaign have formulated concrete solutions and a vision for changing the country, beyond some general discussions about corruption, modernization and justice, it seems that the crises will continue after voting day. In fact, Bulgarian society does not seem to understand or care about the development of anti-corruption, which still continues.
Justice is one of the conservative institutions in every society, the change of which can take years. And social change in Bulgaria has a mystical character — it takes place and happens, but silently, without public conceptualization. Is the Borisov government really anti-American and pro-Russian because it receives criticism from the US and the EU, while Russia rejects criticism? Is the time coming when Bulgaria will really start to modernize and Europeanize? Someone once said that in Bulgaria everything is secret and everything is known. But answers in the media are not heard.
Photo: Sofia, Garibaldi square (source: Pixabay, CC0)
The Barricade is an independent platform, which is supported financially by its readers. If you have enjoyed reading this article, support The Barricade’s existence! See how you can help – here! Also, you can subscribe to our Patreon page.
The Barricade also has a booming Telegram channel,  a Twitter account and a YouTube channel, where all the podcasts are hosted.