Who bought Politico for a billion dollars? A right-wing German news conglomerate? 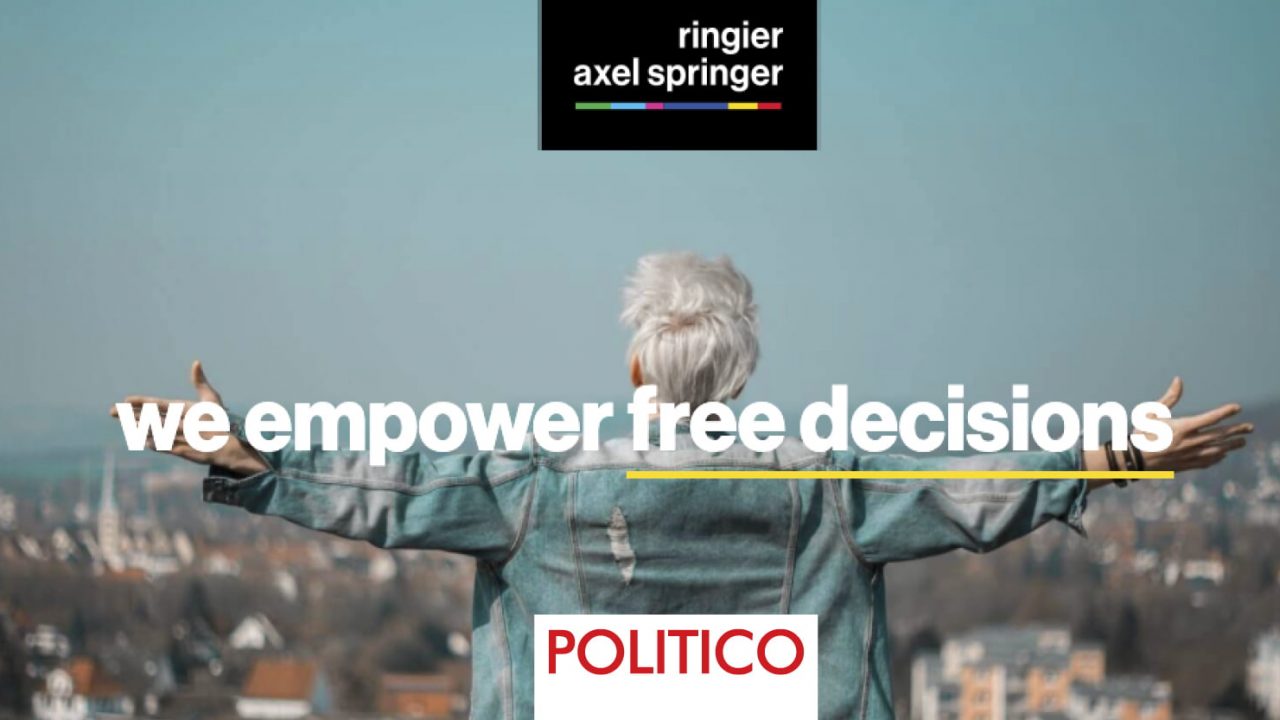 At the end of August 2021, Germany’s right-wing Axel Springer bought the US political magazine Politico for about $1bn (€850m) – the most expensive acquisition in the history of Germany’s right-wing Springer Group. Until the Springer takeover, Politico used to belong to the Capitol News Company of media owner Robert Allbritton.

Allbritton founded Politico in 2007. Until the ideologically-motivated Springer, Politico tended to deliver mildly critical analyses. In the US media landscape, Politico “was”(!) considered a fact-reporting liberal news site.

This is set to change under the leadership of Germany’s ultra-conservative Springer. Politico’s website receives about 54 million visitors per month. Since 2013, a print edition has also been published in two-monthly intervals.

In 2014, Politico (50%) and Springer (50%) founded the Brussels-based offshoot Politico.eu. Most recently, Springer had tried to increase his stake in Politico.eu, but also showed interest in a takeover of Politico competitor, the news’ site Axios.

Once the Springer takeover of Politico (US) is completed, Politico.eu will belong entirely to the Springer Group completing yet another step towards global media concentration, i.e. a global oligopoly.

After the Springer takeover, Albritton will remain on board as the publisher of the magazines he founded, for which a total of around 500 journalists work. The editorial offices in Washington and Brussels should remain independent, Springer claims for those who believe in fairy-tales.

Politico thus becomes Springer’s second major pillar in the US online market in a conservative (Springer) against an even-more-conservative (Murdoch) fight. Like Murodch, Springer hates environmentalism, Green Parties, trade unions, and liberals in general. In 2015, Springer acquired Business Insider – another challenge to Murdoch’s Wall Street Journal – for €300m. At the end of 2020, Springer had also acquired the US newsletter provider Morning Brew.

What Murdoch is in Australia, the UK and the USA, Springer is in Germany and, increasingly in Europe and now with Politico also in the USA. Like Murdoch, Axel “Cäsar” Springer – who carries the Roman middle name Cesar (anti-democracy, militarism, conqueror, etc.) not entirely undeservedly – started early. From his beginnings in post-Nazi Germany of 1948, Axel Cäsar Springer rose to be the most powerful publisher and right-wing propagandist in Europe.

The life of Herr Springer (1912-1985) was that of a spoiled son of a medium-sized publisher from Hamburg. Eventually, he became a manic newspaper owner with right-wing political ambitions spiced up through the enjoyment of late-night life.

Springer’s aversion against everything ordinary might have prevented him from becoming a Nazi as a young man. Like many spoiled rich kids, Springer avoided military service by claiming illness. Foot-soldiers and gun-fodder is for the poor – not the rich.

While young Springer may have disliked the thuggish Nazi’s Hamburg Altona Blood Sunday, he subscribed to German nationalism and chauvinism. After the liberation of Germany from Nazism, Springer has never had any problems employing ex-Nazis. He even married Rosemarie – the daughter of SS-Gruppenführer Werner Lorenz.

In Post-Nazi Germany, Axel Springer quickly became the coldest of the Cold Warriors calling the Soviet Union, “red-painted Nazis” in an attempt to re-write history. In reality, the Nazis created Auschwitz and the Communist liberate Germany’s prime death camp. Springer’s media outlets have always – rather diligently and rather consistently – worked to distort history.

Springer’s staunchly nationalistic daily Die Welt has kept running not for financial but ideological reasons – it is not profitable. Bild makes handsome profits. Even more than self-elitists Die Welt, Springer’s grubby tabloid Bild became the mass organ of his right-wing struggle. Springer used to check both papers almost daily – perhaps to make sure they tie the ideological line.

In post-Nazi Germany, Springer mutated into becoming the archetype of a power hungry press monopolist. Mirroring what Rupert Murdoch’ daddy (Keith Murdoch) once said about Australian prime ministers – I put him there, and I’ll put him out – Springer has tremendous power in German politics. Any, and even the most mildly progressive German politician knows, don’t mess with Bild.

Axel Springer’s sense of political mission and ideological political program is characterized not by facts, but by emotions and his disappointed vanities – just like that of Rupert Murdoch.

Today, the Springer Corporation stands above all – for right-wing populists Bild tabloid. The Bild tabloid has been the driving force of Springer’s publishing empire.

Springer’s Bild remains the publisher’s greatest success. More recently, Springer launched a tabloid-TV channel under the brand name Bild. At some level, it reverses Springer’s 1965 dictum that his Bild was the printed answer to television. The idea behind Bild-TV is to create Fox News for Germany – an ideology instrument of political campaigning and mass propaganda.

Recently, the Springer news channel Welt-TV – Die Welt is Springer’s non-tabloid right-wing newspaper – has been broadcasting live from a studio in Springer’s new building in Berlin. Inside, digital offering of the newspapers Die Welt and Welt On Sunday are produced seeking to influence and shape – evil heretics might say manipulate – politics and even the upcoming Bundestag election.

Beyond that, Bild-Live is broadcasting on the Internet. For example, instead of showing the inauguration of US President Joe Biden, Bild offered a documentary called, the most embarrassing sex stories in the world. Bild, as Springer on the whole, remains a right-wing populist and deeply divisive.

Key to Springer are volume of sales, newspaper distribution rates, market share, and, of course, the all important bottom line, i.e. profits. Springer’s Bild has never been about informing or educating people. Springer is a fine example of the old motto, if it bleeds, it leads – if it thinks, it stinks. In short, Springer’s Bild loves the poorly educated

No other German press product polarizes more than Springer’s Bild newspaper and it has done so for many decades. One of Bild’s most-hated figures was Rudi Dutschke. Hyped up by the Springer press, Bild-reader Josef Bachmann shot Dutschke in 1968. Dutschke later died from his wounds.

In a 2007 film, the story of Günther Wallraff infiltrating Springer’s Bild in 1977 was shown. Wallraff exposed Bild’s tremendous power. In 1977, Wallraff worked for four months as an editor for the tabloid Bild in the German city of Hanover. He exposed Bild’s inner workings by showing the way Bild fabricates news.

Undercover journalist Wallraff called himself Hans Esser. Selling 600,000 copies in the first three weeks, in his book Der Aufmacher (1985). Walldraff’s bestseller was based on his experiences as an editorial staff of Bild.

For first and only time, Germans saw Bild’s crypto-journalism in action. It displayed a deep contempt for any form of humanity. Eventually, Wallraff’s book formed the basis for the 1990 English language film The Man Inside starring German superstar Jürgen Prochnow as Wallraff.

A recent and a very typical Bild story is that of a young mother living in the city of Solingen who is said to have killed five of her six children in 2020. Bild got to a twelve-year old friend of the surviving eleven-year-old son pressing him for information.

Bild’s images and coverage were particularly repulsive. Some say disgusting and gross. They lacked any form of decency – never mind ethics and morality. Bild had continued its extremely high level of inhumanity.

Bild’s reporting by its so-called journalists showed their ruthlessness when it comes to interviews done without any regard for victims and children. We are talking about children in an almost unimaginable extreme situation. They are exploited by Bild. Bild uses the exposure and cruel use of children to increase newspaper sales. In the twisted ideology of Bild – this is journalism. Once again, Bild had abused a child to access information while violating the sphere of a child’s privacy.

Springer’s Bild regularly ignores complaints from Germany’s Press Council put in place as a camouflaging institution. In reality, the council is enabling an institution. Since years, Bild does not even bother – in many cases – to print corrections demanded by the council. There are no other sanctions.

Yet, Bild’s overall system is much worse. It is obvious that Bild uses sensational, emotional and often plainly wrong reporting as a strategic means to generate attention and increase circulation and, of course – profits.

Bild’s crypto-journalists do this out of career lust with next to no ethical feelings. Meanwhile, Bild’s editorial offices remains a highly organized and super-efficient institution. It is designed to fabricate news stories in which human misery can be exploited for financial gains. Virtually, all of Bild’s editors-in-chief have never been interested in journalism, human decency and morality. Bild does not even pretend to show journalistic responsibility. Instead, Bild’s rather toxic modus operandi is dehumanization.

Beyond that, Bild’s publication of photos, as well as addresses and phone numbers of people remains highly unethical. Bild’s abhorrent reporting remains seemingly unchallenged by the aforementioned paper tiger – the Press Council. Germany’s Press Council is the self-governing body issuing so-called public rebukes – Bild might regard these rebukes as funny jokes.

Most recently, Bild attacked Germany’s prime expert on the Coronavirus pandemic, virologist Christian Drosten. Drosten is the head of virology at Germany’s most respected Charité Hospital in Berlin. In 2020, Bild accused him of questionable methods. In a typical Bild fashion, unsupported attacks are often framed with Bild’s infamous “?”

Bild wrote, how long has the star virologist known about it? In the end, it turned out that Bild had translated quotes used to semi-support its attack on Droten from an English-language source acknowledging that its quotes were quite freehand. Plenty of Germany’s politicians protected Drosten and so did Germany’s public.

Yet, Drosten was just a pawn because Bild wasn’t really after him. It wanted to damage Chancellor Angela Merkel seeking to prevent another term, of whom is regarded as not conservative enough. On 11th September 2020, the German Press Council issued a complaint against the reporting of Bild. Later, Bild’s editors cited a mistranslated study of the source – case closed.

In 2011, the journalists and communication scientists Hans-Jürgen Arlt and Wolfgang Storz examined Bild’s nationalistic depiction of Greece during the Euro Crisis in 2010. The study came to the conclusion that Bild sent chauvinistic messages to its readers depicting lazy Greeks.

Beyond that, the report has found that Bild hardly informs about the facts. This is not the task of a right-wing populists’ tabloid. The task of right-wing tabloids is propaganda camouflaged as news reporting. Worse, Bild uses semi-journalistic manipulations but almost never pursues the goals of truthful journalism, the report noted.

These are the new owners of Politico. Given all this, it is highly likely that the aforementioned days of Politico as a “liberal news site” are numbered. Springer, may it be with his deeply ideological crypto-elite Die Welt or, may it be with his outright right-wing populists Bild has never subscribed to the idea of reporting news. The Springer Empire will, almost inevitably, convert Politico into an ideological platform of right-wing populism.

This article was published on 31 August 2021 at BuzzFlash. The opening photo is taken from AxelSpringer’s Polish site.
The Barricade is an independent platform, which is supported financially by its readers. If you have enjoyed reading this article, support The Barricade’s existence! See how you can help – here!
Also, you can subscribe to our Patreon page. The Barricade also has a booming Telegram channel, a Twitter account and a YouTube channel, where all the podcasts are hosted. It can also be followed in Rumble, Spotify, SoundCloud and Instagram.

The real Zelensky: From celebrity populist to unpopular Pinochet-sty..