When I say Bulgaria is a failed state most people look at me as if I’ve had too much to drink or accuse me of overdone pessimistic posturing. OK, well, get this!

There are comical aspects to nearly every sad phenomenon. This is especially true in politics. Here is a short story balanced somewhere on the border between politics, culture and crime chronicles, and at the same time including elements of comedy and horror. 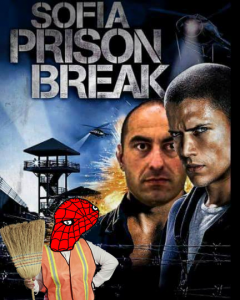 On 4 April two Bulgarian criminals escaped from the Central Prison in Sofia, the capital city. They were armed, they threatened the guards and escaped as if they were acting in a Hollywood movie. Except for one little detail which made the whole thing deeply Slavic – and that was the role of the cleaning lady. Not a policeman, not a guard but the courageous cadre of the cleaning personnel! The right-wing Bulgarian outlet Mediapool claims the woman chased the two recidivists until the last moment, when they finally got past the walls. Bulgarian Facebook has already nominated the fearless cleaning woman for various awards, including the one for Man of the Year.
But before we let our imagination run wild and start discussing whether she threatened the gangsters with a broom or a mop and what kind of astonishment and confusion she put the fugitives into, considering they had just made a number of policemen shit their pants… Let us just analyze the situation briefly.
The first question is how these people got hold of guns. Of course, there is no answer to that. The escape occurred while their relatives were visiting them and giving them a TV set. Three guards were attacked one after the other. Eventually, the fugitives went through a major door “that was generally kept open”, as the Bulgarian Justice Minister explained when asked by journalists. According to the Prosecutor’s Office, they had gone past several guard posts in the building they were locked in before they got to the street. Most likely someone was waiting for them outside. 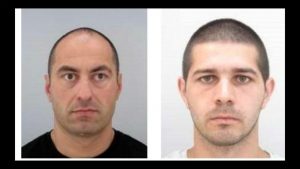 Both fugitives have been convicted of serious crimes – murder, attempted murder of policemen, robbery and kidnapping. One is the famous criminal of Botevgrad, Vladimir Pelov Stefanov. He was serving a sentence for robbery and the attempted murder of police officers. Previously, he was sentenced to 15 years for killing a currency exchange cashier. Pelov was also suspected of killing two siblings in Botevgrad in 2016. The other fugitive – Radoslav Angelov Kolev – has a 26-year sentence for murdering a 15-year-old girl at a bus stop in Pernik two years ago. Earlier, he was also convicted of hooliganism and property damage. Pelov’s most recent conviction was in May 2016. Kolev was convicted in the first instance at the beginning of last year.
This is where the serious part ends. The rest is the circus in which Bulgarians have been forced to live for nearly 30 years. Had it only been the jail cleaner, the people would have laughed for a while and moved on. But this time the government gave them no chance. They asked Danail Kirilov, an important functionary of the ruling right-wing GERB party who is mostly known as the main contact person for all the shadowy lobbies in Bulgaria, to deal with the media. And when journalists approached him to ask WTF, he attempted to dismiss the whole incident, saying that there was nothing really to get excited about – “escapes from prisons have occurred since the time of the Count of Monte Cristo”, explained Danailov.

This truly jaw-dropping reaction was later translated into what has got to be somewhere in the top 10 of the silliest headlines in the history of the mass media: The ruling party calms the people – even the Count of Monte Cristo was a prison breaker.
But it doesn’t all stop there. Soon after this ‘explanation’ was provided by Danailov another news story broke. Perhaps the most shocking element of the entire story is the fact that Stefanov and Kolev were known to be plotting an escape well in advance. The Bulgarian Ministry of the Interior sent numerous memos to their colleagues in the Ministry of Justice, which is responsible for prisons. They were punished for smuggling mobile phones into the prison, but that wasn’t enough to prepare the Sofian prison authorities to prevent the escape. Most people laughed even harder when this information surfaced but one cannot escape from the obvious conclusion that this is yet another shocking example of the total implosion of Bulgarian institutions and statehood in general.
And that is pretty much where this story ends, but one cannot really detach it from yet another dark humoresque which erupted in Bulgaria a couple of days earlier. 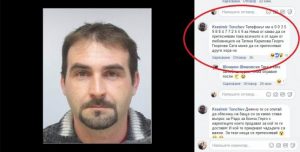 On March 28 a scandal involving the Sofia police went viral. A man who is declared to be a wanted offender wrote his phone number in the comment section of a post by Sofia Police on Facebook. Krasimir Tonchev has a current sentence for driving without a licence. He explained to journalists who approached him that the police had never contacted him before. At the present time Tonchev lives in Germany and claims that all court summons went to the address written on his ID card where his ex-wife lives, who he is not in contact with. Tonchev argues that the police have not sought other close relatives.
One day earlier the Sofia Police released 56 photographs of people with enforceable sentences, who were declared wanted.
Krasimir Tonchev has been living in Germany for the past few years. He claims that in 2015 he was driving a car without a driver’s licence. That same year he was sentenced to 2 years and 6 months’ probation. At the beginning of last year, however, his sentence became effective without him knowing. The police announced he was wanted, which he just figured out from the Facebook page of the Sofia Police.
“I am not sure how long I’ve been a fugitive from the law. I do not know. I found out about all this in the morning. A friend called me and said he saw me in a Facebook post among the worst”, said Tonchev.

But what is even more comical is that the search list was out of date. It was not only Mr. Tonchev who approached the Sofia police department via Facebook, but also other policemen who worked in prisons where some of the bad guys were actually doing their time. “Colleagues, are you kidding?! Numbers 1 and 36 have been here for months.” “This is pathetic! Are you really looking for this guy? He was convicted about a year ago!”. Huge numbers of comments like these appeared underneath the post.
The search list was later updated and Mr. Tonchev has been contacted. But the decline of the Bulgarian state continues.