What shows a study, that analyzing the effects of the fight against fraud during the university exam in Romania.

There is already a rich scientific literature on the fight against corruption, both in general terms and specifically about Romanian anticorruption (just a few examples here: Stephen Samsson (2010) “The Anti-Corruption Industry: From Movement to Institution” Global Crime, 11 (2): 261 Philippo Cercili – “Corruption, Restitution of Ownership and Romanianism” by Dieter Haller, Chris Shore (2005), “Corruption: Anthropological Viewpoint,” Pluto Press: 83-99). Recently, the following study was published on the fight against corruption in education: Oana Borcan, Mikael Lindal, Andrea Mitrut (2017). “Fighting Corruption in Education: What Works and Who Is Profitable?” American Economic Journal: Economic Policy, 9 (1): 180-209).
In 2011, following the numerous examples of transcripts and frauds in mathematics, the system for monitoring the final exam for secondary education was introduced. Education Minister (2009-2012) Daniel Founierou said on May 24, 2011: “The content of the exam and the way it is conducted is half-identical to the one from last year. The new element was the reinforcement of government zero-tolerance cheating measures. The strongest sign of reform not only in education but also in society is to have zero tolerance for fraud”. The results were not delayed. The percentage of students who passed the secondary school leaving exam in 2011 (44.47%) was almost half that of 2009 (79.95%) – see the table below. 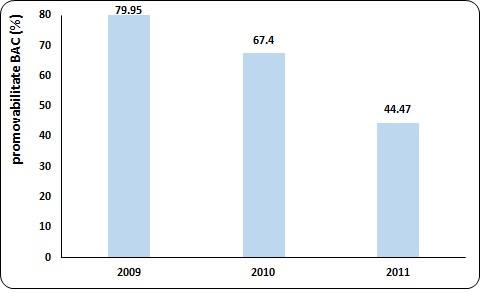 The data show that anti-corruption policy is effective. After placing the cameras for observation of the students, less than 50% pass the exam in 2011. This is the worst performance of the graduates in the history of Romania. In the article above, the three authors analyze the results of the 2009-2012 exams and reach important conclusions. One of them, the most radical one, is that, following anti-corruption practice in education, the inequality between poor and wealthy children has increased. In particular, the percentage of poor children who fail at maturity is higher than that of middle-income and high-income children (… the anticorruption campaign resulted in increased inequality between poor and non-poor students – Oana Borcan et al, p. 206). This is how corruption in education can function as an additional tax to further reduce poor students (according to the Global Corruption Report 2013 of Transparency International, cited in the research in question). Anticorruption perpetuates old social divisions by hindering equal access of graduates to human capital. The authors of the study had hoped that the introduction of a meritocratic system would increase the chances of those deprived of economic capital, of the poor: “Given that bribes require economic resources and are an opportunity to circumvent efforts to make higher estimates, we assume that eliminating or reducing corruption in matrices will benefit poor students. Since assessment of matrices is the only or the main criterion for admission to Romanian higher education, we expect the results of anti-corruption to contribute to access to higher education”.(Page 182)
The study has several methodological details that I will not develop here. Those wishing to learn how poor students have been identified and other details about the study’s internal cuisine can find the quest in this affordable online analysis.
The authors emphasize very clearly that:

1. Anticorruption is not a panacea and can not be regarded as a perfect solution that will heal the serious problems in society: … anti-corruption programs are not a cure for all diseases (page 208);
2. If the poor deal worse in a highly transparent system, with the deepening of social inequalities, public policies in the field of education are needed: “… the discovery that poor students are doing worse in a non-corrupt environment is very important to people, who make political decisions”. (page 208)

In the conditions in which post-communist Romania evolved, it seems surprising that the authors have been considering the chances of the poor to grow up with the most accurate evaluation system. Surely, forms of corruption in matrices could limit people without the financial resources underlying the social pyramid. However, data show that eliminating these parallel forms of “cheating” has made the poor even more vulnerable. This fact should not be surprising. Given that the final exam is “free and honest,” the poor, deprived of economic capital, will have to use the accumulated knowledge. Students with above-average earnings have used the parallel system of preparation: private lessons.
If we analyze the period after 2011, we will surely notice that the system of private lessons thrives. Anticorruption mechanism means an increase in income for pre-university education teachers. There are also private lessons in geography, history, biology, and so on. These disciplines did not pose a problem for high school students before the Founière measures were introduced. Then it was relatively easy to finish. Certainly more in-depth research is needed to show what I’m theorizing here. But it is clear that poverty is deepening at many levels in post-communist Romania.
After 1989, the country was subjected to a violent process of deindustrialisation. Regions and counties in the southern parts were more exposed to this phenomenon. Poverty has become a widespread phenomenon. Whole areas were transformed into economic, cultural and social deserts. Migration for most people was a rescue solution. The data testify to the scale of this phenomenon. Romanians are fleeing to the new territories of abundance.
Investments in education are steadily declining (it has never been a priority). And private schools have established themselves as new engines for social climbing of the social capital. Therefore, the drop in the level of preparation and early school leaving came in a bundle of recurring economic crises. It now proves that the fairness of the exams is becoming a real obstacle for the poor. We are in a situation where “the school institution represents a social barrier analogous to the one that divided the big and the small aristocracy from the rest” and “the highest social positions are those that are monopolized by children from privileged categories” Pierre Bourdieu, The New Capital in IDEM (1999), Practical Reflections, A Theory of Action, Meridiane, Bucharest: 26-36). If we look at the students who reach the major universities, we will see that the new educational policies and the economic conditions really reinforce the social boundaries. There are many weaknesses and imperfections in the post-1989 period. Romania is increasingly a country with increasing inequality, and policies with a potential for real social impact continue to exist in public consciousness only as transient illusions.